Learn the best strategies and tactics from the top leaders in Outside Sales. Get hands-on tips you can implement today!

'Outside Sales Talk' is hosted by Steve Benson, CEO and Founder of Badger Maps, the #1 route planner for Field Salespeople. He talks to industry leaders and experts about the strategies that made them successful. 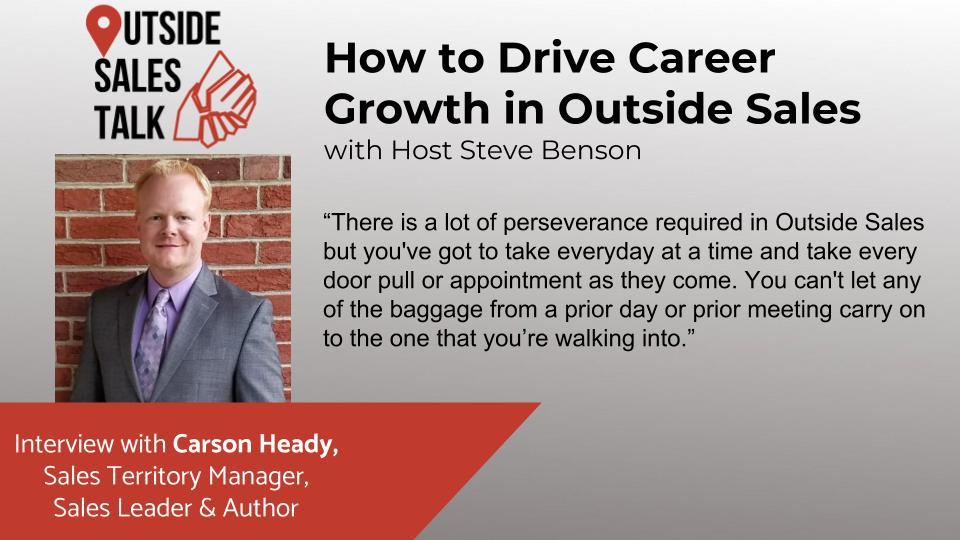 Carson Heady is a top performing outside sales leader, speaker and management consultant. He’s the author of the ‘Birth of a Salesman’ series, which details the art of sales - from interviewing through preparation, pitching, closing and advancing your career in sales.

During his career, he has served at multiple levels of leadership at Microsoft, AT&T, Verizon and T-Mobile. In his role he’s overseeing partner relationships and leading strategic sales planning to grow revenue. He has a strong social media following of over 330K followers, has hosted the Smart Biz Show on EG Radio, and has been interviewed by a number of sales gurus including Jeffrey Gitomer and Jeb Blount.

Here are some of the topics covered in this episode:

Listen to this episode on iTunes, Stitcher, Google Play or wherever you get your favorite podcast!

About the Guest: Carson entered the sales arena at age 22 and has found success at every level, from top-flight sales representative to a division leader over 200+ people. His devotion to the sales game occupied much of his time, but his desire to write never left his mind. Once Carson realized his great aptitude in the game of sales, he decided to write his first novel – “Birth of a Salesman” – which told the story of a young man who came into prominence in the sales arena and doubled as a self-help sales advice manual to guide anyone to the level of success he achieved.

He is a profound public speaker, superior corporate leader and, in addition to having letters featured in prominent magazines and local newspapers, he wrote his own bi-weekly column for his department. Carson lives in St. Louis, MO, with his 2-year old daughter.

Get this podcast on your phone!